Many factors affect the performance of solar cells. Some of them are shade, location, roof type, and many others. Things like humidity, clouds, atmosphere and many others affect production. We will just discuss the effects of the colour of light on solar cells.

A case study was conducted to find out the effects of the colour of light on solar cells. That experiment had shown that the red colour affects solar cells. This was done by using its wavelength. We know that the sun emits electromagnetic waves. We can calculate energy by using E = hf. It depends upon the solar panel material. They are sensitive to different frequencies. The wavelength of light influences solar cells. Over time, solar cells have been improved. Because when designers observed the effects of wavelength, they improved. White light comprises all the lights. Red photons have minimum energy, and blue photons have maximum energy. Green lies between the two.

Doers concluded the above results.

Voltage vs Distance from Light

Distance from Light source vs Voltage is pretty self-explanatory. The more the distance between panels and light sources, the smaller amount of energy will produce. And the same thing phenomena is with a smaller distance. 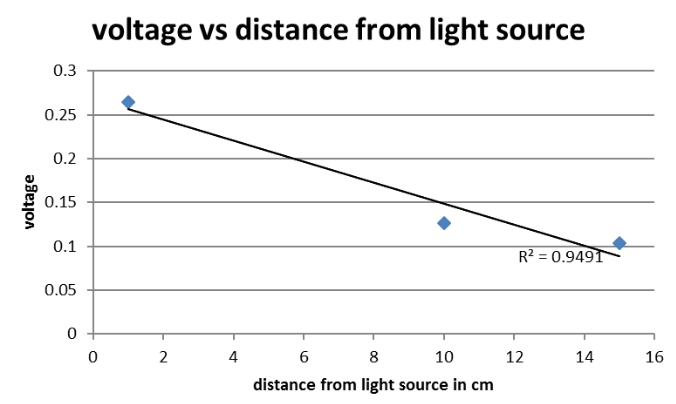 Solar energy is usable energy. It is free and clean energy once you install the system. We generate it from the sun as we put where sun radiations fall on in excess amount. When we talk about the production of solar energy, there are many ways of generating it. One of them is using photovoltaic plates. Earlier, people used solar energy for residential purposes. But now people use it for industrial purposes too. Initially, it was expensive and not that accessible. But in today’s time, it is much easier to access.